Elmo, what are you doing in Boston? 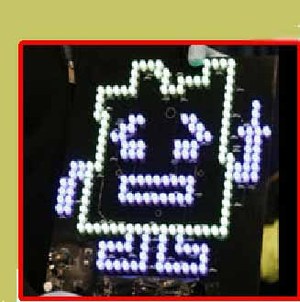 Oh my GAWD!!! Ted Turner stole Elmo.  When I was 8 years old I painted this masterpiece.  I was in art classes at Cranbrook Institute in Bloomfield Hills, Michigan.  Elmo was like the family Mona Lisa.  My mother had him framed and when I was in my 30s she finally gave him back to me.  He has no place yet in my apartment in Buenos Aires, but that did not give CNN the right to rip him off.  Think I should sue?

I have been following that crazy story about those lighted thingies that look like Elmo they placed all over Boston.  I am amazed at the mass hysteria that has resulted from it.  I feel so removed from American life.  I just cannot imagine a whole city freaking out because someone placed lighted thingies looking like my Elmo all over their city.

I mean come on, do people really think bomb guys are going to go through the trouble of mass producing an Elmo thingie and placing them publicly?  I mean isn't part of  the objective of bombing to surprise your target?  I think someone is watching tooooo much television.

If that would have happened here people either would have not noticed them or thought they were part of some advertising thing.  So what does that say about American culture these days?  Are Americans living in that much fear and paranoia?  If so, how sad.

I live in Boston and all I can say is how very embarrassed I was as I realized that thousands of tax dollars were spent to "detonate" dozens of Light-Brite's across my city. Over Reactive? Just a bit. I understand that perhaps we need to be cautious in this day and age, but perhaps we should also use common sense and judgement before shutting down our city and causing panic in the streets.

Removed from American life? Yes, and that's a good thing for me. I limit my news in-take on what's going on there. My regular contact used to be watching Prime Time or 20/20, but CableVision cancelled them and took care of that. Now all I do is watch the Hollywood awards programs, like the SAG awards today and Oscars in a few weeks. Glamour beats politics anyday. I refuse to use a cell phone, put up a website or a blog. Keeping my life in BsAs is something I take seriously. I'm not a Bears fan, but I may tune in to see if my home team won at the Superbowl.