I remember the first time I met Mimi.  It was 2002.  I think it was in the spring.  Maybe March.  I was in Lo de Celia.  I was sitting with 2 women who were sneaking whiskey into their coca colas.  As the night wore on they became friendlier and friendlier.  That was not the case when I was first seated at their table.  A woman at the table next to me; Mabel, an old milonguera saved me.  While I could barely make out her Porteña Spanish, she would feed me interesting tidbits about the men, some of the women, and give me feedback on my dancing.

At about 2:30 am maybe later Mimi came into the milonga with a large group of people.  As always the case she made her entrance.  Actually Mimi never makes an entrance, it is usually the people who are with her that do.  She was with several dancers from Forever Tango, a radio personality, and a woman who was helping Daniel Lapadula in his classes.  It was Lucero who introduced me to Mimi.

She saw me sitting with these two women and immediately came to see me.  She asked if I was alone. She didn't ask, she dragged me to her table.  She introduced me to everyone there.  I don't know what happened that night, but as we say "algo paso" - something happened.  Mimi became my best friend. She says no.  She became my big sister.

I was in awe of her at first.  She was "Mimi."  Everyone, including Copes talked about Mimi.  She was the "Maestra" for the new Señor Tango.  She was everyone's teacher.  I expected her to be snotty, aloof, and arrogant, like some of the other stars.  Instead she was warm, friendly, and sooo Mimi.  She didn't have much contact with foreigners.  I was something unique.

Mimi was never my teacher.  Not in the classic sense.  She was my teacher in only the way a big sister can be for her little sister.  When I was in my "ida/vuelta mode" or what she called my neurotic love affair with Buenos Aires she was the first person I would call when my feet hit la tierra.  I would wait for her after her classes.  We would go to milongas together.  She took me to typical Argentine restaurants where they knew her forever, and later they would know me.

She introduced me to her father's friends, her friends.  She talked about the past.  When I asked Mimi when she learned to dance, she told me it was in her mother's stomach.  Her father started her dancing at 3 years old.  She learned to lead and follow at the same time.  She took me to where Pugliesi played on Sunday afternoons and told me what it was like as a 7 year old girl to dance with Marionito her father.  She took me to los 3 esquinas and sang to me on the day I helped her get her visa to the U.S.

Mimi brought me into her family.  Before I moved to Argentina and after.  I have celebrated Noche Buena, Año Nuevo, Pascua (Christmas Eve, New Year's Eve, Easter), and her birthday in her big home in Devoto.  I know her 4 children and 7 grandchildren.  I am a part of her extended family. Last night we celebrated her birthday.

At first she did not want to celebrate.  She had recently returned from 3 months in Europe and the U.S. She was exhausted. Only as a little sister can I begged her to change her mind.  I took her out for birthday pizza on Wednesday and pouted.  On Thursday she called to tell me that Saturday we would celebrate her birthday at her home.

My friend Snow had no idea what to expect.  First there was the ride in the remise.  She wasn't sure what would kill us first, the erratic driving or the carbon monoxide.   It was easy to tell which house was Mimi's because you could hear the tango music down the block.  "Don't her neighbors care?"  Snow asks me. I respond, "No, this is Latin American on Saturday night."

The door is opened by a young girl. "What happened to you?"  I gasp!  This is Mimi's youngest granddaughter.  "You used to be like this."  I put my hand about 2 feet from the floor.  Now she is a beautiful young lady.  She gives me a hug and kiss.  "Hola Deby." she says to me. We enter Mimi's house.  All the furniture is pushed out of the living room. 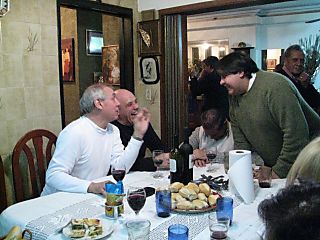 There are long tables pushed together for eating.  Tons of food is being prepared in the kitchen.  Mimi is flitting around.

As we come into the living room, Mimi's daughters grab me.  I say hello to them.  I have not seem them for awhile.  I introduce Snow to Sandra and Monica, and Sandra's husband.  Some more of the grandchildren are around.  I tell their mothers I am shocked at how big the kids are.  I have known them for 6 years.  In kid years this is a long time.

Mimi is thrilled to see us.  She gives us both big hugs.  She tells us to take our things upstairs.  I take out my camera destined to be the designated photographer for the evening.  Most of these people are people I see every year.  Elsa, Ana, Susana.  There are new faces.  Students from Club Oeste.  People will come in and out all night.  It is amazing how much food there is.  We start with Pizza.

Snow tells me this eggplant thing she is eating is wonderful.  I take what I think she is eating.  Yeech it is this horrible meat thing.  (I don't eat meat.)  I got the dishes confused.

People are dancing.  All Argentine family parties include dancing.  I sit down and talk to Elsa.  She is with a friend from Italy.  Mimi takes him to dance.  Poor man. 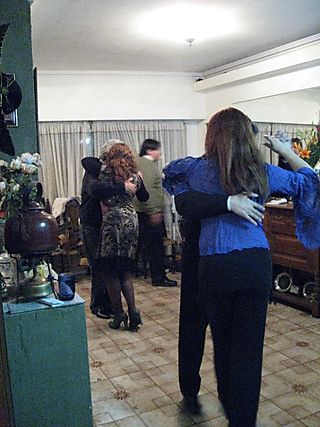 He is a horror story on the dance floor. Mimi starts to lecture him about being able to dance in 4 tiles not the whole floor.  Now the horror story is on me.  They tell him to go to Juan's milonga on Tuesday and that I should dance with him.  This is the duty of the little sister.

Snow is very impressed with the food.  Argentine lasagna is not the same as what I they make in the U.S. It has ham and lots of other things in it.  I am eating stages as I am dancing as much as I am eating.  Poor Snow, there are maybe two other people here that speak some English.  She is having a good time.  She is impressed with how much fun people are having. 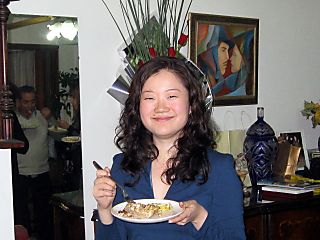 At about 2:00 am we give Mimi her birthday present.  It is a beautiful wool coat and scarf.  She is crying.  She talks about what it means to have good friends.  She talks about how family does not always have to be family from blood.  I start to cry.  I don't really have family.  For me, Mimi is my family.  She has always taken care of me here.  When she is done I run to her and we hug.  Everyone is trying to hug her.  She is so loved by so many people. 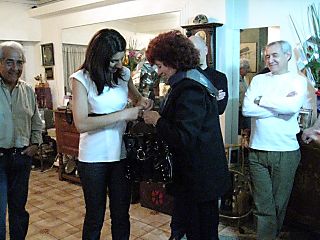 Now the dancing is in full tilt.  Everyone is dancing.  Snow cannot believe the neighbors are not complaining.  I keep telling her this is Latin America.  At 2:30 am we light the birthday candles.  Graciela made both cakes.  They are amazing.  The chocolate one with strawberries is to die for.  I tell Graciela we should get married.  She finds this humorous.

I am sitting and talking to Maria when I look up.  In walks Pepino, Eduardo, and Juan.  I am surprised to see them.  Mimi is estatic.  Pepino was singing in Mataderos at Las Glorias.  They came to surprise her.  When he saw me his eyes lit up like Christmas trees!  "Mi amor!! he calls out to me.  "Where have you been?"  He throws his arms around me.  I have not been going to the same milongas that he goes to.  Juan tells him that I have been at Gricel. 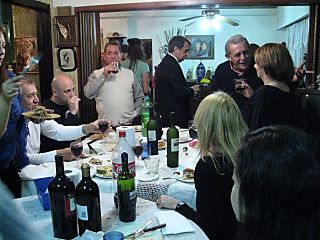 We all go to sit down at the table.  Pepino is surprised to see me at Mimi's.  I tell him "You didn't know Mimi is my sister?"  He says to Mimi "Mimi, you will be my sister-in-law?"  She raises her eyebrow at him.  Everyone laughs.  After cake Pepino gets up to sing.  He sings 2 beautiful tangos.  Everyone is mesmerized.  Then he tells me he will sing the last one for me.  I try not to laugh, but it is the same tango that Pablo always sings to me.

Now we are back to dancing.  I dance with Pepino.  (Whose real name is Miguel Angel.  He says his mother would die if she knew people called him Pepino) He is a wonderful dancer.  He keeps asking me to marry him.  I dance with Eduardo.  We go back to the table to talk. 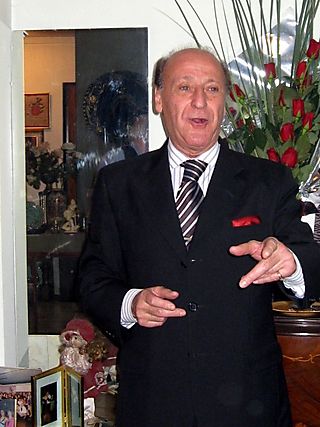 They make fun of me.  Juan says "We have adopted you.  You are so Argentine now."  It is funny now every is impressed when I tell them I have not been back to the U.S. for more than 2 years.  "Too expensive."  I tell them.  Mimi tells them she wants to take me with her next year when she goes.    She tells them Costco is not as much fun without me.  Then she starts to describe Costco which is hysterical in itself.  She liked the vibrating chairs the best.

Pepino and Juan remind me how when I first came I answered almost every question with "I am just here to dance."  "That is because I knew how you guys are."  I told them.  "And how are we?" they ask. I roll my eyes. 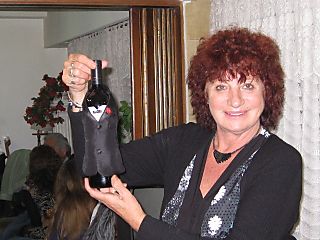 We drink a champagne toast to Mimi.  To friendship.  Happy Birthday Mimi.  I love you.

Happy, happy birthday Mimi!! Hope to see you soon again. Thank you Deby for bringing this special celebration closer to me.

Debbie, I am so glad you wrote this tribute to Mimi and the good time you had at her birthday party. I wish I had been there. We were blessed to enjoy Mimi's visit in Tallahassee just a few weeks ago, and we all had a wonderful time, with Milongas in two cities. We have a bench in the back yard called Mimi's bench. She would go sit there every day and medidate with the birds and other animals.

hey! cant getinto my email temporarily and it's 3.47am (just leaving work) and i wanted to see how your knee was...better???soap opera????
all hell is breaking loose here as it is the 15th of aug on fri and tons of greeks have poured onto the island....your last blog made me smile..you have met good people there and you,too, must be a good person to attract them...i found that both inn italy and greece that happened to me (not to flatter myself, of course) ok
im going home to yoga, shower, and bed...ad to do it all againn tomorrow-except that at least i hae my mini milonga!!!!!!my 1 1/2 hours of bliss in the week!!!ok..so hope by now you are feeling better..pain sucks..
besos
den