Roxie is with the angels 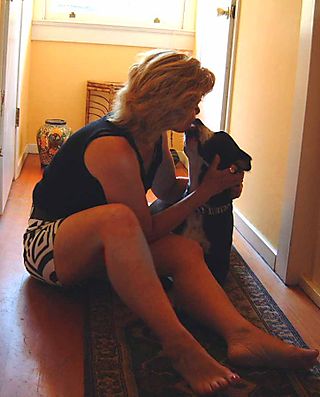 She was my best friend.  She was always there. Just like best friends are. It never mattered what I said or did.  She always loved me.  Dogs.  They are unconditional.  All pet owners think their dog is special.  I never really liked to talk about how special I thought Roxie was.  I let other people do it for me. She had friends all over the world.

Today at 9:27 am she went to the great dog kennel in the sky.  Where she can finally be in peace.  My baby.  In the end it was not that hard a decision.  We were both suffering.  Probably me more than her. Her vet Jorge told me that she stayed alive for me.  With all her problems she should have died over a year ago.  But like me, she was determined, she hung in there.  She wouldn't let go.  And now I am alone.

I remember when I got Roxie.  It was 3 months after Sophie died.  Sophie was the pit I had before Roxie. She was fawn and white.  If Roxie was affectionate and a clown, Sophie was acerbic and sarcastic.  Pits have horrible reputations and unduly so.  They are the greatest dogs when raised properly.  (Look at Tige in the Little Rascals!) I would have no other type of dog.  They are loyal, intelligent, and affectionate.  They make excellent companions.

Diego wanted a rottweiler and I wanted another pit.  I knew that in the end it would be my dog.  In December 1995 I found myself looking through the classifieds for puppies.  I will never forget that ad.  "Pitbull puppies.  No papers.  $100. "  That night Diego and I went to Union City.  I told him it was just to "look."  I didn't even take my purse to prove it.  He was steamed.

When we got there, there were 2 black and whites, and two fawns.  The black and whites were female, the fawns were male.  Diego was not happy.  He wanted a male dog.  I didn't want another fawn and white pit.  In the end he decided that if he could choose and name the dog it would be OK.  He choose what he thought would be the meanest looking dog.  For that, Roxie threw up in his car on the way home.

I suppose I could write about all the crazy dog things she did.  I think it is best to have them as memories.  Yesterday she had a terrible seizure.  She collasped on the sidewalk for 10 minutes.  When she came to, we walked to her vet.  Her back legs were begining to go.

When we came home she went to her blanket and laid down.  She didn't touch her food all night.  She didn't want any of her favorite cookies.  She just slept.  When I came home later that night, she was in the same place.  I laid down with her and I hugged her. When she looked at me, I knew.  She was telling me that she was tired.  I knew it was time.  While I cried, she licked my face.  Always my friend.

This morning she didn't want to get up.  At about 9, she made an effort.  It was painful to watch her. We got to the corner and she collasped again.  People came to help me.  Roxie is well known in our barrio.  Someone ran to get her vet.

We carried her to Jorge.  When he saw her, he told me I had two options.  Before he could tell me, I asked him to please put her to sleep.  I could not bear to see her suffer anymore.  I know that this is what she wanted.  In the middle came her paseador - Juan.  People stopped him to tell him what happened.  He ran into the room and gave me a big hug and kissed Roxie.  He was crying.  An Argentine man who cries.  He could not bear to watch and ran out again.

I know when she left me.  Just like Sophie.  I could feel her soul at peace. I know you are with the angels Roxie.  And I know, you will never leave me.

Hey D...I'm sorry that I'm just now reading (and crying) about this news...she's happy in doggie heaven...and in your heart now...forever...

I was saddened and shocked to hear of Roxie's passing since she had been doing so well for her condition. I feel your loss.

I am very sorry for your loss.

Oh Deby,
Roxie Rocks! Like I always say.
She waited until you were ready to let her go. A true and unselfish offering of her devotion to you.
Everytime you look up in the sky and see stars she is one of them now looking back at you.
Take care of yourself.
gracee

I'm so very sorry for Roxie and for you.

My heart goes out to you. I too am very close to my dog. I walk her twice a day, and she sleeps in my bed. When I was in Cartagena for a few days recently I really missed her.

Oh, Deby, the tears are running down my face. I am so sorry for your loss. I know how much you loved Roxy and how much she loved you.

These are sad days, indeed. I spent the entire night crying for Omar.

My heart is breaking for you and Roxie. Through you, I know just how special she was.

I'm so sorry to hear of Roxie. A few months ago we lost our beloved cat to cancer, and he hung in there for us too. He knew we weren't ready to say goodbye. Companion animals who we share our lives with are so special -- they love us unconditionally. I wish animals could be with us longer than they can...

Roxie was always at the door, happy greet everyone who entered your apartment. She was so lovable. That's how I'll remember her.

Deby, I havent been in touch since I left you and BA back in April but i always read your blog just of a way to be in touch. I am so very sad to hear about Roxie and I am so sorry for your loss. She was a lovely dog and a true companion and I know you will miss her terribly. She is not suffering anymore though and I am sure she is running around in heaven right now very happy and greatfull that she found a great companion in you while she was on Earth. My thoughts are with you all the way from Sri Lanka...x

I have read your blog from time to time and quite honestly think you get so much wrong in your understanding of BsAs, your sometimes pedantic and arrogant descriptions of tango, and your interpretations of the adoration that is showered upon you in the City, however, in this case, you have written a truly poetic and beautiful expression of your love for your dog and sadness at her death. This is certainly your best piece. More like it please.

Lo sciento Deby, you and Roxie travelled such a rich path together. May time help ease this loss, and the love of friends hold you in their warm embrace.

I´m very sorry for your loss, Deby. And I have tears in my eyes right now because you were able to express what it feels like to lose a dear pet. I experienced that same thing with our family dog Maia last year and it was a hard thing to go through since she wasn´t even 5. But I had one of her puppies to help me get through the sadness and now it´s easier to focus on the good times we had together and smile when I think of her.
So here´s hoping that soon it´ll be mostly smiles :)

Please accept my sympathies. I can tell that both you and Roxie had a lot of love between you, and it extended to many others.

Deby, I am very sorry for your loss. I know Roxie was a great dog and a wonderful friend for you.

Take good care of yourself; it's hard to be the one left behind.

strength and light..my thoughts are with you xx

We're so sorry to hear of your loss of Roxie. Our deepest sympathies and our thoughts are with you.

I'm so sorry for your loss.

thinking of you, deby... i understand how you feel about losing a friend, the one who was always there.