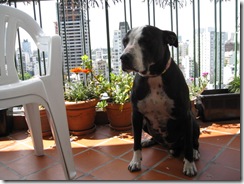 Today, one year ago, on September 16, my Roxie died.  When people ask me about her, or when I think about her, I still choke back the tears.  She was my Roxie.  The bravest, sweetest, most loving pit bull doggie.  I still cannot believe she left me.  I could write a whole blog, or two, or three about Roxie.  But I don’t want to write about her death.  I want to write about life.

I believe that when Roxie died, somewhere in Moron a litter of puppies was born.  Or maybe it was before she died.  The sad thing was, who ever owned the mama dog, abandoned the litter of pups.  That is not uncommon here.  As much as Argentines love animals, there are many people here who do not care for their pets.  They abandon them when they go on vacation.  They abandon them when they don’t want them anymore.  Spaying pets is not common here, so you can only imagine the quantity of unwanted puppies and kittens.  There are no subsidized shelters here.  There are kind individuals who have started their own shelters, but there is nothing well organized.

I have this fantasy that Roxie who always looked after me, sent me Maxi.  (Oh and did she ever) I made Roxie promise to never leave me.  She had to.  Her cancer finally got the better of her.  So in her place, she sent me Maximiliana.  I do not know if Maxi is the reincarnation of Roxie or if Roxie sent her to me, but I don’t believe it was an accident that we found each other.

Juan was Roxie’s paseador – dog walker.  In a way he is family.  He was with me when I had to put Roxie to sleep.  In January last year, he and his brother were walking in Moron when heard squeaks.  They were walking under bridge.  At first they they thought it was a rat when it moved.  But when it squeaked again, Juan was sure it was a puppy hidden in the filth and trash.  When he got closer it ran away.  He and his brother chased it until they finally caught it.  She was filthy, undernourished, but adorable. At least she appeared to be adorable.

His brother took the puppy and named her Brenda.  (A totally stupid name) They figured she was about 4 – 5 months old. When Juan came back to the capital he found me walking in the barrio.  “Encontre una perrita re-dulce” he told me.  I wanted nothing to do with it.  I told him so.  I never wanted another dog.  I could not imagine having another dog after the Roxinator.  He kept insisting that when he looked into the face of this puppy he knew this puppy was for me. Every time he told me this I told him “NO”. Famous last words.

Two days later he rang my doorbell and asked me to come downstairs.  Like a fool I did.  He opened his car door and there she was, sitting on the seat.  When I went to look at her she barked at me.  I mean really barked.  When I told her to shut up, she jumped into my arms.  That was it.  She was to become “Maximiliana, the most spoiled dog in Palermo.”

In the beginning I wanted to kill her.  La Demonia.  “Me traijiste una demonia”  I would tell Juan.  I forgot what it was like to have a puppy, let alone one that had been running wild for who knows how long.   It didn’t matter she had a face only Disney could perfect.  Those huge big brown eyes and that wrinkled brow, along with the mouse squeaks.  She was a dog with “issues.”  A polite way to say she was the puppy from hell.

She is a total street dog.  A fighter.  She shunned affection. A leash was not for her.  Sit maybe.  The rest of the commands forget it.  Jumping on the table to eat with me, sure why not?  Try to housebreak a puppy when you live on the 17th floor.  I wanted to drop kick her.  Thank God I still had the shipping crate I brought Roxie in.

If she didn’t like what I wanted her to do she would sit there and defiantly bark at me.  Once in a party I had, she jumped on the table and began to help herself to the food.  Another day the woman who cleaned my apartment started screaming.  Maximiliana had jumped on the dining room table and started gnawing at one of the chairs.  I mean why use one of the many kongs or bones you have when you can have a dining room chair?

Sometimes walking her was impossible.  She was so afraid of not having anything to eat she would try to eat the gum off the sidewalk.  She was like a vacuum cleaner.  Anything that resembled food went down before I could stop her.  Juan told me he never saw a dog inhale garbage as fast she did.

Obviously she wasn’t all bad.  She was learning to accept affection.  The defiant barking was down to a minimum.  My guests loved her.  Even the ones who didn’t really like dogs.  One look into that little face was all it took.  I would remember the 22 pair of shoes that Roxie ate along with the wood window sills and the remodeling of my kitchen floor.  No one would believe me that Roxie had been worse than Maximiliana.  But she was.

Unfortunately Wendell the dog trainer lives in Emeryville.  I seriously contemplated paying him to fly here to whip this dog into shape.  He did the best job with Roxie.  I needed to find someone like him for La Demonia. I found Mariela the dog trainer.  Twice a week.  Now Maximiliana walks on a leash, she sits, stays, and goes down.  She will come in the dog park, but only with a cookie in the house.  Mariela says she is “vivo”.  She is a pretty smart little dog, after all she survived the streets.

When I fall asleep on the couch, more often than not I wake up to a puppy who has wrapped herself around me.  In the mornings when I let her out of her crate, she licks my face.  When I look into those big brown eyes I wonder, “Will I ever have the connection with her I did with Roxie.”  But then, I remember looking at Roxie and wondering the same about her with Sophie. I like to think that Roxie’s spirit is here with us.  I know that she sent me this Demonia, and although I complain, I adore her.

That Maxi is something else! I see that her training is paying off though - she's definitely developing some manners. Besides, with a face like that, you know you're powerless no matter what she does. :)