If you aren't a Facebook friend, then you probably don't know that in February, my little family grew.  Now in addition to Maxi Novitz and JerryBrown Novitz, there is Cacho Milonguero Novitz.  It was never my intention to have two dogs, and for sure Maxi and JerryBrown were not thinking about this either.  But you know, shit happens.

I had this friend in the milonga - Juan Carlos.  He had two strokes and was hospitalized.  He had a year old puppy he called "Pichuco" that he obviously could not care for.  A good friend came and took the former Pichuco to her home, where she lived with her two cats.  Unfortunately he terrorized the cats and was a real quilombero.  She wanted him to go to a good home so she posted on Facebook that he was Juan Carlo's dog and that he needed a home.

I don't know what happened to me.  I saw this little black puppy with a sad face.  He was really cute.  His pictures and the post were shared by many people I knew, but no one wanted him.  Everyone that he was adorable, but not enough to step and say they would take him. 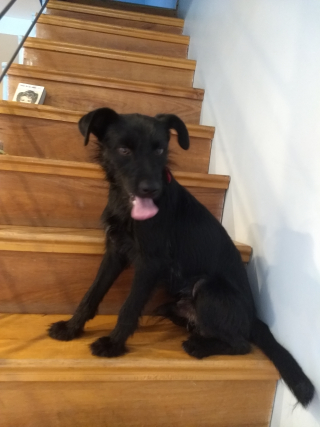 I felt bad.  I offered to take him as a fostered dog.  I was leaving in a couple of weeks for a 6 week trip to Europe, Morocco, and Miami. (What a combination) That weekend Karin came with her daughter and the former Pichuco in a carrier.  I met her downstairs with Maxi.  Maxi was thrilled.  She could not wait until he came out of the carrier.  But the poor little guy was overwhelmed and he could only cowe before Maxi and yes, JerryBrown.  JerryBrown decided he was worthless since he didn't know how to play.

He knew no commands.  He didn't even come when you called him.  He had worms and fleas.  He seemed very sweet but meek.  That lasted until the next day when I fed him.  He turned into a snarling, snapping, biting, gargoyle.  He was scary.  He bit me, he tried to bite Maxi (she was faster) and JerryBrown escaped to his hobbit hole.  Food was obviously an issue with this guy.  Google to the rescue.  I fed him upstairs in the bathroom with the door closed.  He could eat in peace and know that no one was going to take his food away.

He didn't know how to ask to go outside.  This meant 10 walks until he got the idea he was supposed to go outside and not inside.  We would go to the pet store Puppis and he would pee on the floor there.  Male dogs mark. I never had a male dog.  But everyone loved him.  He attracted attention wherever we went.

I was leaving soon. Maxi always goes to her former dog walker in Palermo when I leave.  I sent Juan a Whats App with Cacho's picture, age, weight, etc.  Juan is in a network of dog walkers who look rescue dogs and find homes for them.  He was very optimistic about being able to place the dog formerly known as Pichuco.

Then a few days before my trip, he came and sat down next to me. He gave me "the look."  It was a sad look.  It was like he knew he would not be here permanently.  I felt bad. In that moment I realized that he was such a sweet puppy, smart, and trainable.  OK, we have to change your name.  I thought.  Since he doesn't respond to Pichuco or Troilo or Coquito. (All names people in the milonga said were his)

I believe that animals choose their own names.  I started. Cory Booker?  No response.  Negro, Negrito. (He did respond but seriously, that would not be such a great name.  Blackie.)  Houdini. (He was the great escape artist even when tied up)  Shadow. (Because he followed me everywhere)  Then one day after getting into to it with JerryBrown I told him "Sos un cachito de mierde" (You are a little shit. Cachito is from Cacho which means piece.  It's a nickname for many men) He looked up at me. "Cachito?"  He feebly wagged his tale and from then on he became Cacho or Cachito or even Cache.  He liked that name.  He came when called.

He left with Maxi to Juan's with a long list of behavior issues.  Juan is like the dog whisperer.  I was 5 days into my trip and he sent me a Whats App.  "Food isn't a problem anymore."  Throughout my trip I got Cacho and Maxi updates until one day he said that he could get him adopted.  "Noooooo"  I told him, he's ours.

It's now been 4 months.  I never felt like I shouldn't have done this.  He is a sweet dog.  I hate to say this, but much sweeter than either Maxi or especially JerryBrown.  He is learning.  I cannot get him to learn any commands in Spanish.  He rebels.  He knows them all in English: sit, down, come, and we are still working on stay and leave it.   He's difficult.  I think it's his being a male..and an Argentine male at that. Getting him fixed should help many of his macho issues.

He hasn't quite figured out that JerryBrown is the man of the house...and he is..the intruder.  Don't mess with JerryBrown.   Jerry Brown  will win everytime, and when he gets in trouble, Maxi comes and drags Cacho away by his neck.  These guys actually like each other, although sometimes it's hard to tell.

I love watching them interact.  I suppose it's like having 3 kids.  Here we are.

Posted at 08:18 PM in Argentine Politics and Culture | Permalink | Comments (0)